The investment decisions act as a leader and constitute the starting point for any type of company; the trade and production activities dominate the human resource. All type of productive activities constitutes what in finances we called the OPERATION. The expression is given to operative leverage which is defined as the relationship between the percentage of increase in the UAII (profit before interests and taxes), divided by the percentage of increase in the sales that originated them.

To this exercise, it is fundamental to initiate the analysis of reviewed balance taking care of the characteristics of each particular company, specifically as far as it concerns a mixture of sales, the policy of prices, adapted classification of costs, terms of sale, and productive cycle including the storage.

Known the point of reviewed balance in terms of units to produce and to sell, pass to analyze the different alternatives that appear concerning production and sales, as follows:

a. Change of prices.

c. Change in the mixture of sales.

d. Variations in the productive cycle.

Taking as starting point the amount and price of reviewed balance make a matrix in excel, carefully raising each one of them and the corresponding one individually calculated of the operative profit.

Example: The Company KKKK sells its product mixture at $ 12000/per unit ready price and offers the following discounts.

1. ANALYSIS OF THE BALANCE POINT

Obtaining the amounts of balance we will have valuable information about the minimum amounts to produce and to sell so that losses do not take place.

2. CALCULATION OF THE POINT OF REVIEWED BALANCE

A. CALCULATION OF THE PRICE AVERAGE OF SALE: it is equivalent to average, which is obtained soon multiplying the participation of each type of client by the net percentage and affecting the price of the list by the obtained result, thus.

B. CALCULATION OF THE REVIEWED SALE PRICE: as the company sells at three months, the reviewed sale price is obtained taking to price average to a present value, based on the capital cost.

The objective is to calculate what we would receive if they paid us in cash.

The reviewed variable cost is obtained taking the variable cost previous to a future value considering the rotation of inventories and the cost of capital.

D. CALCULATION OF THE REVIEWED AMOUNTS OF BALANCE: the contribution margin that represents the margin to cover the costs and fixed expenses and of providing a profit.

Next, the reviewed amounts of balance will be diving by the fixed costs on the margin of contribution with reviewed sale price and variable cost.

2,767 units are due to produce a minimum to have a margin.

If by means of technological development, the company manages to reduce the fixed costs a 15% and increases the units produced and sold by 5%, it reduces the cycle of production and sale to 60 days and with one financial restructuring is managed to diminish the cost of capital by 2%, as it will be the new point of balance?

a. Calculation of the reviewed sale price

b. Calculation of the reviewed cost of sale 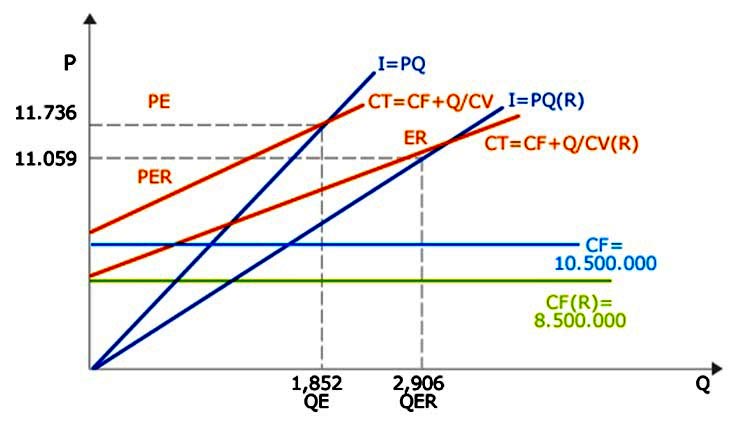 In the previous graph, the new point of reviewed balance can be observed; in this last one there was a variation in the fixed cost, in the units to be produced, the cost of the capital, and the rotation of inventory in comparison with the initial situation and the operative result could be followed:

The trade department gives a favorable concept to sell 2,000 units to $8,000 in cash. Is it justified to make the business or not?

The 2,905 units were taking place and selling initially.

Adjustments of income in sales

NEW PRICE FOR THE MIXTURE OF PRICES

But Client B pays in 60 days, then this income diminishes depending on the cost of capital and the term of payment. In order to obtain real the additional income the value that we have we took the value to a present:

But client C pays in 90 days, then the previous income takes to a present value, discounting according to the term and to the cost of capital.

A client has arranged to buy 2,095 units and she pays them $8,200 in cash. The company is producing 2,905 and as the client wishes 2,095 altogether would be using the total capacity of the plant.

4. ANALYSIS OF THE ALTERNATIVES 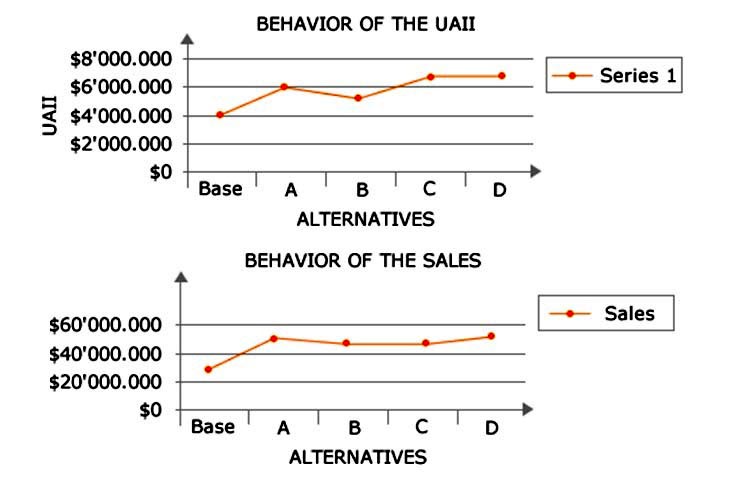 Having a high degree of operative leverage does not mean that a good company is in a good situation. This figure gives a so beneficial idea that could be the increase in the sales or the dangerous thing that could be a decrease.

The leverage gives an idea of the operative risk which is a certain structure of costs and fixed expenses the company incurs.

A high degree of leverage in circumstances is advantageous, but it implies a greater operative risk.

5. APPLICATION OF THE SYSTEMS OF COSTS

We briefly remembered the functioning of the systems of costs, which can be transformed in two:

1. To constitute a basic tool for the making of decisions and evaluation after the exercise.

For it the following recognized system exists as follows:

2. To serve as a basis to inform the government of the results of the exercise and to calculate the profit (micron or macroeconomic).

A. TOTAL COST: also called, absorption which adds the costs of the period to the produced units as the process advances. It is understood by the costs of the period those that appear in function of the time, independently of whether it takes place or not. It is the case of the fixed costs like renting, part of the public services, monitoring, some headings, etc.

These costs add to the product, using base recommendable as for the particular case. Among others they can be, hours of manual labor, prime cost (raw materials + direct manual labor), produced units, etc.

It allows calculating the total costs without omitting them and is very useful to know all the components when the plant capacity is full.

B. DIRECT COST: it considers as components to the cost, only the identifiable elements with the product name, direct materials, and direct manual labor. The difference between the direct sale price and costs is called the margin of contribution. The margin of contribution must be sufficient to cover the costs with the period (fixed) and to contribute to the profit margin that the company delays to obtain in the sale.

It demands a high dose of prevision because the company must have sufficient maturity in the systems of planning, stops of that form to calculate with stop index of certainty, the volume of fixed expenses that are due to absorbing with the amount to sell, later to add the profit. Useful for companies with the capacity of the idle plants is especially that allows establishing prices differentials to penetrate in new markets.

C. ABC COSTS: on determined occasions, specifically in the sector of services (banks, financial institutions, hospitals, insurance, etc). It is important to measure the value of each productive activity and charge the fulfilled costs for each one.

The different systems of costs have advantages and also limitations. For the decision making and to process models of planning it is advisable not to cling to a system in individual, but to use the combinations that allow obtaining the objectives of the company to a short, medium, and long term.

D. SUMMARIZE: analysis of the operative leverage begins with an analysis of balance reviewing carefully the assumptions on that the model in a particular case is based on and doing the pertinent adjustments.

In general, we must review the list price and the costs affected by inherent financial expenses to the time of process and storage.

Based on the reviewed point of balance prepare a scene with the different alternatives as one acquires knowledge in the final panel of the exercise (analysis of alternatives).

The company must decide on the best alternative of the operative type that allows obtaining the best level of profits before interest and taxes.

Taking as a reference the alternative from smaller operative profits, calculated the percentage increase in the sales.

And come from the same form with the increase in the operative profit.

The degree of operative leverage is divided by the relationship between the previous results, as follows:

It is interpreted as the times that the operative profit by a unitary increase in the sales increases. 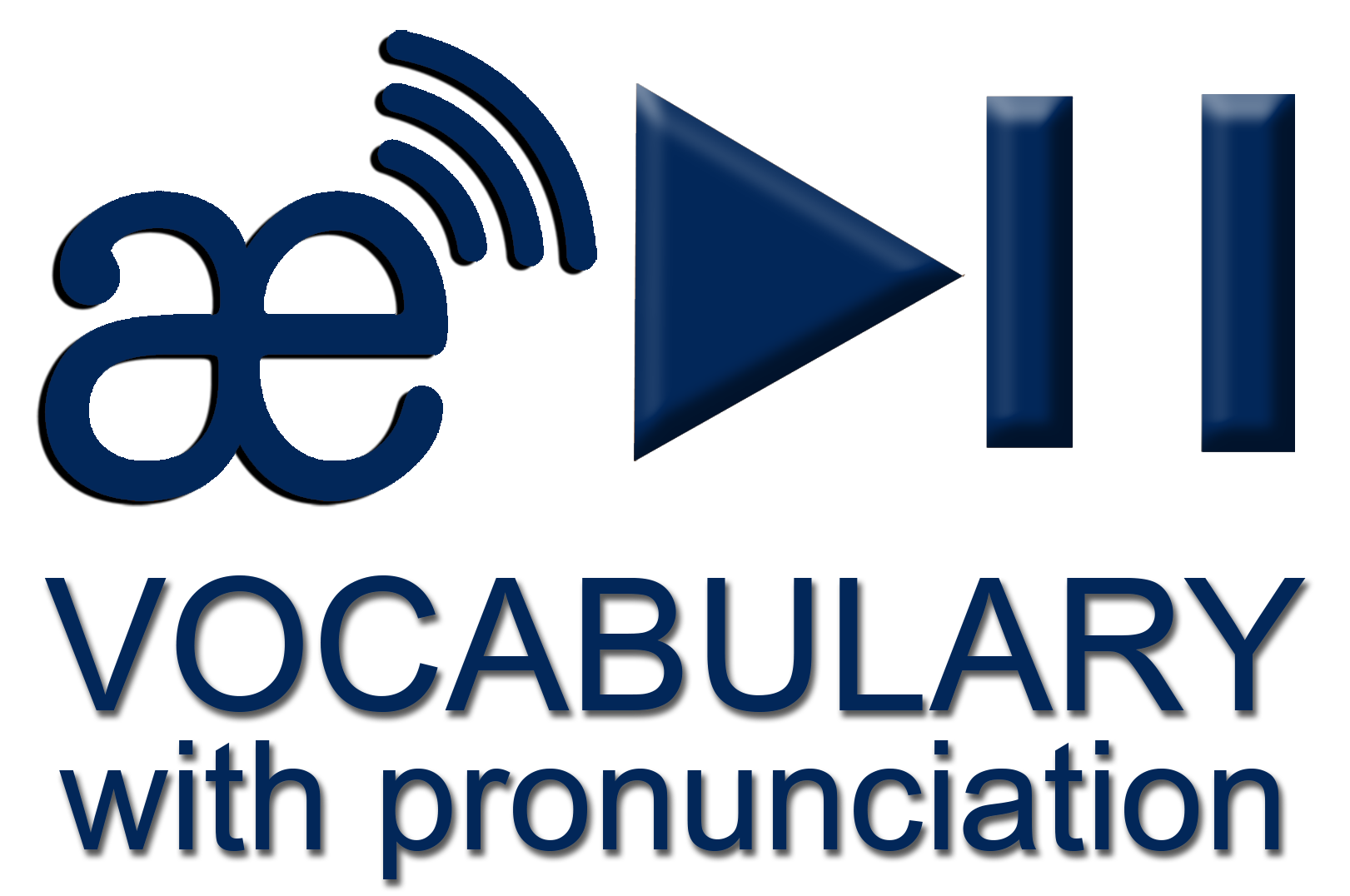 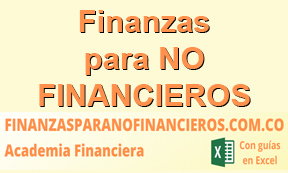